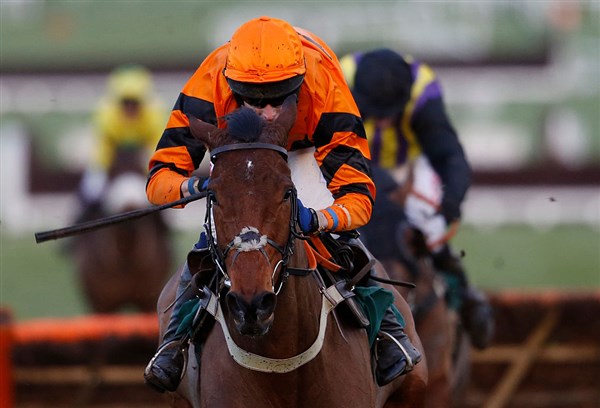 They say that you should always bet with your head rather than your heart – we’ve used that advice after many years of betting on jumps racing but the last two days have been serious head-scratchers for us! Sprinter Sacre yesterday was one of the most incredible things we have ever seen. What a training performance. He looked brilliant on his first run back, before only just beating Sire de Grugy after Christmas. That today was like something he would do three years ago, stalking the front-runners before an effortless passing move. De Boinville did it calmly as he has done for the last 18 months riding for Henderson. He and all the team deserve their success.

It’s left us down in the pocket, but you can’t put a price on these moments in the first couple of days. What awaits us on Thursday and Friday? @RWMORACING

Not the greatest race to begin the day. We’ve been stung a little with the first during days one and two, hopefully, we can set that right here. Garde La Victoire moved here from the Arkle and that looks like a wise decision, he jumps really well and should stay on all day. Richard Johnson’s only ride in one of the big races too- an interesting side point to the contest! Outlander is a horse who has been laughed at a little, perhaps unfairly so. He won well last time out on Irish trials day and seems to have improved. He could break Bryan Cooper’s festival duck, good ground will also be of assistance (it will be helping many contenders today by the looks of things).

Black Hercules has improved for chasing and apart from one crucial error last time, has jumped beautifully. He moved here from the four-miler due to him being a little bit keen- so you’d imagine today’s distance won’t be an issue as Ruby Walsh looks for his 50th Cheltenham Festival winner. You get the feeling that he will claim that landmark a little later in the card though…

Bristol de Mai deserves a mention. His trainer is in form and despite his young age has always looked like he would benefit from chasing sooner rather than later. He could be a bit of a forgotten horse but does he have the class of our selection?

Now, this… is tough.

Like we said in the Fred Winter… You need a good solid yard, you need good connections, a strongly determined jockey. If the horse is well handicapped then that is of course a big help. It still leaves far too many to decide upon, so we have thrown some darts at these chaps.

Warren Greatrex is due a win and despite Missed Approach’s huge rise in the weights, he is still unexposed. Leave at Dawn has clearly had this race in mind for a while and looks competitive off 10-9. Too many to go through here!

This was written before the entry of Vautour yesterday! He’s going to win and win it well, but here were our thoughts anyway for what they are/were worth.

Obviously, how good this bet turns out to be is dependent on if Vautour turns up or not. 12/1 however is a huge price (8/1 if you want NRNB) for a horse that has just finished third in a very strong King George. Five of the last seven winners of this have ran in the KG while nine of the last 12 winners have been aged eight or older- a bonus for this old geezer at 11 years old. We like our stats and the fact that there’s never been an Irish winner of this is a bit of a shock. Almost 30 have tried and failed, so immediately our attention turned to finding a Brit with some kind of chance. More stats. 10 of the last 11 winners of this race have previously won at the course, another positive for our lad there who has claimed not one, but two. A lot of the runners in this market on Oddschecker won’t even go for the contest, which makes us convinced that he’ll be shorter than 12/1 on the day and provide us all with some lovely value. A further bonus is that horses rated 165 or more have provided us with six of the last eight winners of this- Dan Skelton’s grey is rated exactly 165. Now then Mr Skelton, can you do what your old boss couldn’t do and get him performing throughout the duration of a season? Your stage awaits.

Valseur Lido and his performance in the Irish Gold Cup would certainly make him a huge danger. Taquin du Seuil looks an interesting supplement, he was added after a comeback victory and did win the JLT here just two years ago. Smashing looks likely to take up the running and Vibrato Valtat provides an intriguing angle to the race- he has always been backed by Nicholls to improve for a step up in distance and his form is good overall considering the standard of races he has been competing in. Village Vic would have to improve a lot to place here while Josses Hill’s best Chasing effort came last month when he looked totally rejuvenated! Henderson has a habit of going well in this race and it almost wouldn’t be a shock to see him figure at the business end.

The Good ground will have a huge impact on this race. Martello Tower, our ante-post bet, will not improve! He’s a bit of a slogger, and although he took a liking to this place, he might not find selective watering quite enough. Thistlecrack, was so impressive on trials day, and for many, the banker of the meeting. What a start to the next couple of days it would be for Colin Tizzard if he was to saddle this beast to victory.

Cole Harden – the better the ground the better his chance, his prep has been perfect. Some of the words provided to us by Greatrex over the last few weeks at preview nights. No excuses here, Warren. His win last year has been laughed at and mocked by many and this is a perfect opportunity for the Lambourn handler and the apple of his eye to prove many people wrong. We think he will run solidly- but Thistle could be a tough one to crack.

Of the remainder, Alpha Des Obeaux deserves a mention. He was impressive last time and boasts impressive form, with defeats mainly behind Mullins machines such as Douvan. There’s nothing quite up to that here so maybe he can go well at a reasonable price- though many of the traditional trends for this race are against him.

Traditionally one of the tougher races and not one we do at all well in! John’s Spirit clearly well handicapped, but is he the force he once was? His record around Cheltenham is quality but 6/1 seems a bit short for such a competitive race where others may be lurking off a decent weight. Stilletto has been impressive for Mr Nicholls this season, but a big ground question mark for him and has been raised 10lb. Art Mauresque probably needed the run last time out and probably gives Nicholls the better chance of further success- now he will appreciate the faster going.

Kings Palace has generally struggled around here at this time of year so that makes him almost impossible to back, while La Vaticane hasn’t progressed quite as hoped but looks dangerous at the bottom of the page for Pipe and co. Niceonfrankie could be given a form boost by Taquin du Seuil earlier in the day, while Darna was the biggest priced winner at the festival last year though surely won’t be able to repeat the trick here for Kim Bailey. One that we like at a fair price is the ultra-consistent Fingal Bay. It could be the day of Hobbs and Johnson today and if that’s the case- we want to be involved. Should stay this trip and has nice looking form behind Smad Place.

A lot of panic about her not running until so late in the season and a bigger concern was her drift from 1/3 to 10/11 before the off. Why? Mullins often doesn’t run his best mares until the festival, as shown with Quevega and Annie Power. Her form from her Irish debut looks remarkable, with several winners coming out of the race. With her powerful connections, you’d think that Mullins will be wanting to make history as the first trainer to claim victory in this contest. Myska also looks a nice horse and will prove to be a danger, but we reckon this Limini could be something a bit special and have us all cheering her on up the hill this week. She is now priced accordingly for the race, and it will be intriguing to see if they do venture over the flat with her in the Summer, with David Casey reportedly mentioning her for Royal Ascot and Ricci talking about the Yorkshire Oaks! She looks like a potentially special mare and will no doubt be very well looked after by the powerful team. Looking outside the Mullins camp, Smart Talk is likely very useful for Brian Ellison. A Tom Malone purchase, she put Lily Waugh to the sword at Doncaster in a fairly smart race there in January and has been talked up by the North East handler since then. Meanwhile, Henderson is reportedly quite sweet on Bloody Mary and she should have come on a bundle since making her UK debut just over six weeks ago. She might have the scope to really progress for a trainer who should enjoy success in this new race over the coming years and perhaps rates the best value alternative.

Cause of Causes provided us with a big winner last year in the four-miler, and this looks the perfect race for him under Jamie Codd again. The task looks easier without the well-handicapped Our Father, who was sadly injured just last week after exercise. Doctor Harper is one that is definitely still ahead of the handicapper but you do have to wonder about this trip for him, it will be a serious push for him to complete the gruelling 3m 2f. The upswing was a little off the pace in the Welsh National, but the booking of Derek O’Connor looks solid for a race of this nature, and Good ground will be much more to the liking of the eight-year-old. His claims look as good as they come for such a competitive race.

The Giant Bolster is an interesting inclusion, he loves it round here, the distance won’t be an issue- he would need to return to close to his best past form though. Sambremont looks progressive for Patrick Mullins- he beat Ttebob well last time and looks like he will stay all day long. Silver grove was unlucky last time under Tom David and it would be fitting if the pair could redeem themselves in such a contest, while of the remainder Knock House could be interesting for Channon and Carberry.