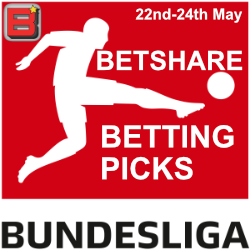 Another full set of fixtures this weekend in the Bundesliga spreading from Friday through to Sunday. 9 fixtures in total that I have reviewed in some depth. Last week’s results very much sets the precedent in terms of the factor weightings for my predictions here. However other factors such as league positions, injuries, suspensions, head to heads etc have also been been taken into consideration.

How To Watch And Bet On The Matches

If you like to watch the matches while you are betting on them the bet365 app would be an ideal mobile companion. We rate the app as being one of the best betting apps in the UK. bet365 are offering live streams on all matches this weekend across the UK, as well as other regions. This service is sadly restricted in certain restrictions to due broadcasting rights. excluded countries are Austria, Germany, Liechtenstein, Luxembourg and Switzerland.

To use the Live Streaming service you will need to be logged in and have a funded account or to have placed a bet in the last 24 hours. Any fixture/event on the bet365 website which has the Play or Video icon next to it is scheduled to be shown via Live Streaming.

The Berlin derby is never going to be an easy match to predict. However with the match being behind closed doors, the rivalry and atmosphere will be completely different to previous head-to heads. This may well take the passion of the spectacle away from the players a little.

Therefore, I see the home team being the more likely victors. Hertha put on an impressive performance last week against Hoffenheim, beating them away from home 0-3.

Union Berlin, on the other hand, had a very tough match against Bayern Munich. Although they started full of promise and had chances to take the lead, they seemed to tire quite early. Once the first Bayern goal had gone in, Union Berlin never looked like coming back in to the game.

Head-to-heads in the past would suggest that there’s a good chance both teams will be scoring so I see Hertha winning this match 2-1 or 3-1.

A lot to play for in this matchup. Both teams are battling it out for a Champions League place, as well as still being in contention for the league title.

Both teams did a number on their opponents away from home last week to keep the pressure up on each other. Another three points from this match will be on top of the agenda for both team managers.

The home one seems the more likely, although the draw result is also nagging in the back of my head. The safe bet then to me feels like one that covers both the home win and the draw.

Dortmund looked red hot last week against Mainz and make for the obvious choice in this fixture.

Wolfsburg have a tendency to crumble against dortmund and as they have been struggling with form, I can’t see them posing too much of a threat despite being the home team.

It took a last minute winner to put away Augsburg last week in quite a dull affair. I don’t expect them to suddenly turn on the dazzle against a team standing second in the league, four points off the league leaders.

Werder Bremen are fighting for their league survival and desperately need three points here to have any realistic hopes of playing elite football again next season.

Freiburg have their eye on a Europa League spot and look like they are in the mood to contend for it after a hard fought draw against Leipzig last week.

I can see this match being a lot tougher than what it may appear on paper. Paderborn are bottom of the table and are 10 points away from the safety zone.

However they are a team that rarely get thrashed. Most losses have been by just one goal. A draw in their last game against Fortuna Dusseldorf will also give them a little sense of pride that they may now wish to display again in this match.

Hoffenheim are pretty much stuck in the middle of the table and at this stage look like they have very little to play for. This also looked the case in their 0-3 loss to Hoffenheim last weekend. A draw seems like the logical outcome here, in my opinion.

I’m expecting Bayern Munich to win here and win big! The last two head to heads have finished 5-1 the home team. Bayern hosted a 5-1 win back in May 2019. However, more recently Eintracht Frankfurt walloped the German giants 5-1 in November.

With Eintracht Frankfurt expereincing some terrible form in the back half go the season I can see a dish of revenge being served up.

Schalke will be looking to get back on to winning ways after being handed a lesson to by Borussia Dortmund. I see them doing just that!

Both teams are stricken with injury worries, but it is Schalke who have the more depth in their squad. I can see this being a significant factor towards the later stages of the game, which is where I see Schalke winning it.

Leipzig have some catching up to do after dropping two vital points last week to Freiburg. The team will certainly be hoping to get a confidence booster by beating a very uninspiring Mainz.

Mainz have only won one game at home from their last eight and that was against bottom of the league, Paderborn. Five of those home games they lost.

That leaves me with no doubt that Leipzig will cause Mainz some serious damage here.  I would not be at all surprised to see a 0-4 scoreline come the final whistle.

Cologne have been somewhat of a surprise package this season and find themselves nicely nestled in the middle of the table.

Fortuna Dusseldorf have been quite predictable and fins themselves fighting to stay up. They are currently in the relegation play-off position, third from bottom.

I see it likely that Cologne will find the back of the net, whereas I’m struggling to see Fortuna Dusseldorf doing so. Therefore the home win is my prediction here. Dusseldorf have been very low scoring in the majority of their matches and Cologne tend to keep a tight defensive line.